Peace and poppies are the sentiment and symbols #CanadaRemembers in November. In this edition of Insignia Insights, we look at how Remembrance Day came to be. Tell you about the ultimate and untimely sacrifice of one Canadian soldier. And why the poppy endures as symbol for more than a hundred years.

On Wednesday, November 11, 2020 at 11 am, we will still pause, be silent for a minute. Think of those who have sacrificed to give us peace.

Wear a poppy to honour them, even if no one will see you.

Producing these enameled gold and red poppy lapel pins once again for Veterans Affairs Canada, is something Trimtag Trading is very honoured to do.

Veteran’s Week is from November 5-11. This year’s theme is the 75th anniversary of the end of the Second World War. Find more information about how you can be involved in honouring those who have served Canada, past and present, in times of war, military conflict and peace.

Looking back to 1918, it was  the WWI peace agreement which is the origin of Remembrance Day. Enduring for more than a century, poppies also continue as a powerful symbol ever since Canadian soldiers fought at Vimy Ridge, Hill 70, in Ypres and Flanders Fields.

Early on Monday, November 11, 1918, the Armistice Agreement of WWI was signed. Meeting in a railroad car in the Forest of Compiègne, three Generals from the armies of the Allies and Germany found a way to stop the fighting and devastation on both sides.

This was a peace agreement instead of surrender. The Generals agreed a cease-fire would begin at 11 am on that day, ‘for tidiness’.

In 1914, Canada’s population was less than eight million. During the First World War,  619,636 men and women served in the Canadian armed forces, of whom 59,544 were killed and 172,950 wounded. Fighting on the plains of Flanders lasted four years for four Canadian divisions. One quarter of Canadian dead in the First World War fell on Belgian soil.

On November 11, 1918, The Battle of Mons, Belgium was the last conflict for the Canadian Expeditionary Force. (Read the Official History of the Canadian Army in the First World War)

Generally recognized as the last British Empire soldier to die in battle, was Canadian, Pte. George Lawrence Price of Falmouth, Nova Scotia. Working on a farm in Moose Jaw, he became part of the 28th Battalion, Canadian Infantry (Saskatchewan Regiment).

Peace did not come soon enough for this soldier.

Attempting to liberate citizens of Ville-sur-Haine, Belgium, Price was shot  just two minutes before the bugles were heard sounding the end of the fighting.

The cost of the First World War in terms of human lives was overwhelming. One of the more poignant moments is the loss of Private Price mere minutes before the guns fell silent. –– Stephen Quick, Director General, Canadian War Museum, 2 Nov 2016

Private Price rests in the Military Cemetery at St Symphorien (Grave V C 4). By chance he is surrounded by the first and last British soldiers killed in action as well as the first Victoria Cross recipient killed in action. 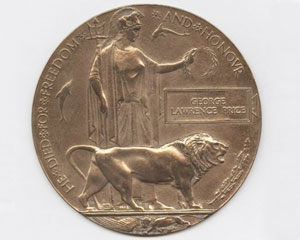 Today, a monument, primary school and footbridge near where Private Price fell are dedicated to him by the people of Belgium.

Supported by Private George Lawrence Price’s descendants and Royal Canadian Legion in Kentville, Nova Scotia, a medal set and this Next of Kin memorial plaque in his honour were donated to the Canadian War Museum in 2016.

In Flanders, there is an extensive Canadian Remembrance Trail where you can get a sense of history, and learn more about the “War to end all Wars”.

Remembering the 1.7 million lost by Commonwealth countries during WWI and WWII is the mission of The Commonwealth War Graves. One of the most visited sites is Essex Farm Cemetery. Here, Canadian John McCrae wrote the enduring poem inspired by red poppies and the war he witnessed.

Reciting In Flanders Fields every Remembrance Day is our duty. Lest we Forget.